Fun and Games in Wisconsin

Ah, things are not always what they seem. Check this out:

So much for any principals they, the Koch brothers, might promote.

Don't forget to place your vote. I voted the first alternative, but hey, if the Democrats do connect the dots...

A Letter to the President

Yesterday I sent this letter to President Obama:

The President of the United States
The White House
1600 Pennsylvania Avenue
Washington, DC 20500

I will not vote for you.

I voted for you in 2008. I will not vote for you. Neither will I vote for any Democrat, whom I have loyally supported in the past.

You can raise a trillion dollars for your reelection, Mr. President, and I will not vote for you.

The explanation is basically here

I had hoped that Mr. Obama’s election would provide a remedy to what I see as happening to this country. I know now that it did not. I believe now that in fact there is no real opportunity, through the democratic process as it is now, to change things. I, and those like me, simply do not have the attention of our rulers.

I am not wealthy. I am not one of them.

Only if I, and millions of others like me, refuse to continue to participate in this charade of a democracy, will they pay attention. To us. And to the law.

The choice is yours. You can continue to vote, and have your voice ignored, or you can send them a letter, and refuse to vote for them. Any of them. And tell your friends, that you have done this. That you have sent the President a letter, and that you will refuse to vote for him, or any of them. That you refuse to consent to what has become essentially a kleptocracy, a nation governed by theft, where the poor and middle class, the worker, the people, are essentially being robbed, even of what they still have. Where you are essentially being robbed, of both rights and wealth, even of what you still have.

Even if they have not come for you yet, they will. They cannot help it. They cannot stop themselves. Even if you do not yet bear the burden of debt, you will. Only the very few, will have anything left for themselves. You already have less than you know, for the debt of your government is your debt. And who do you owe?

If you are satisfied with the occasional bone they may throw you, be satisfied. Play your part in their game, if you think thereby to prosper. Vote.

If not, then do what I am doing, and what I have done, and what I will do. Refuse to vote for any of them.

Send the President a letter. And tell your friends, your fellow citizens, who are also being robbed, of both rights and wealth, even of what they still have.

Only in this way can we recapture the government for the people. For ourselves.

Refuse to vote for any of them.

Send the President a letter.

And tell your friends, your fellow citizens.
Posted by greg at 12:42 AM 1 comment:

Why No One on Wall Street Goes to Jail

If you doubt my assertions
here

This should make you mad.
Posted by greg at 11:35 PM No comments:

An Observation on Marginal Revenue and Elasticity

In the linear case: The slope of the Marginal Revenue MR curve (for a firm in imperfect competition) is twice as steep as the Average Revenue AR curve, (which is equal to the Demand curve.) This means the intersect of the MR curve with the Quantity axis is at the midpoint of the intersect of the AR curve with that axis. But this is the coordinate Q on the Quantity axis of the unit price elasticity on the Demand curve, which always lies on the midpoint of a straight line Demand curve. And this is the point where total revenue = P x Q is maximized. Thus the point of unit elasticity ( e = 1 ) is the point where total revenue is maximized. I probably read this somewhere. 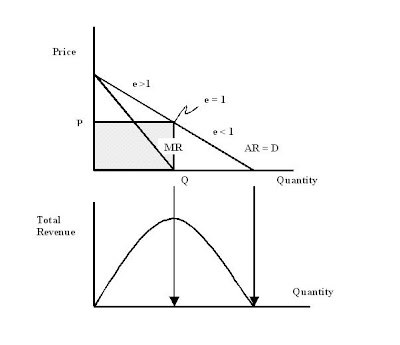 Things are Worse than they Look

Here are a couple of neat pointers: The first goes to a article at a good blog, which points to an interactive feature at the EPI (Economic Policy Institute) website.

A commenter at CT links to:

a lecture by Elizabeth Warren titled: “The Coming Collapse of the Middle Class: Higher Risks, Lower Rewards, and a Shrinking Safety Net.” This is a good and informative lecture. Well worth the time.
Posted by greg at 11:52 PM No comments:

Upside Down: Who the Government Really Gives To

Here's the little blurb on the CFED site pointing to the paper:

"Among the most compelling findings included in the report is that of the nearly $400 billion spend by the federal government in 2009, most funds went toward tax breaks. However, more than half of these breaks went to the wealthiest five percent of taxpayers, who averaged a net benefit of $95,000 each. On the other hand, less than 5% of the federal expenditures benefitted the Americans earning the least. The bottom 60% of taxpayers averaged just $5 each.

This finding and a series of others likely evoke immediate frustration, pointing to yet another barrier keeping low- and moderate-income Americans from getting ahead and achieving the American dream. Yet, with this information comes unprecedented opportunity. As CFED Founder and Board Chair Robert Friedman elucidates, “Taken together, this suggests we have a monumental opportunity not only to save by curbing existing ineffective tax incentives, but to increase net savings significantly by extending effective incentives to the asset-poor majority.”"