More on the Negative Effects of a Trade Deficit


A country experiencing a trade deficit can expect a decline in its manufacturing.  The producer’s welfare is less.  See Diag A, and  http://anamecon.blogspot.com/2011/03/free-trade-welfare-and-debt.html, to refresh yourself on trade, welfare, and the diagrams. 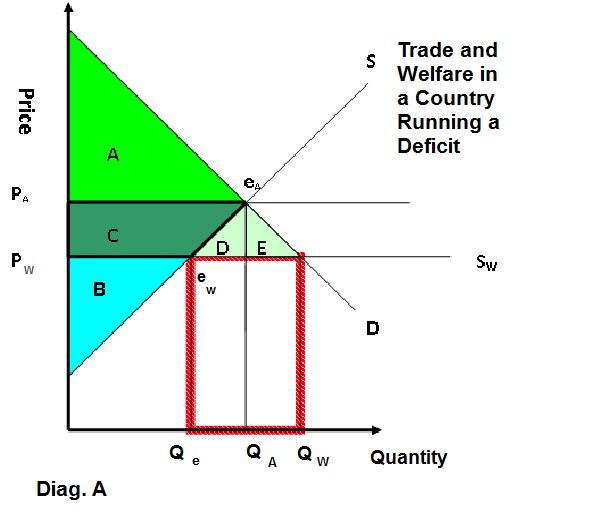 We further examine the case of a nation exposed to unrestricted free trade and where it is trading under a deficit. In Diag. A, the world price level Pw is less than the domestic price level PA.  The domestic price PA is established by equilibrium between the domestic demand D and the domestic supply curve S, which occurs at eA. The world supply is (here) essentially infinite, which is why it is horizontal, at price PW.  While some domestic production is at a cost less than Pw, much is at a cost, along the domestic supply curve S, greater than world price, and these producers are driven out of business.  Those producers which remain lose profits PA – Pw.  The net return to the producing sector is reduced from B + C to just B.

For this, the country running a deficit experiences an increase in consumer welfare A, to A + C + D + E,  for a net improvement in welfare represented by the regions D + E.  But this improvement only temporary, and unsustainable.

The revenue to domestic industry is reduced to Pw x Qe from PA x QA, while the  expenses to consumers, which were originally also PA x QA, change to Pw x Qw, ( This might not be a change, and indeed should be the same as before, since there is no a priori reason for consumers to have available a different quantity of income.  That is PA x QA = Pw x Qw.  The improvement is that consumers get more for their money.)  Now the country runs a trade deficit of  Pw x ( Qw – Qe ).  This deficit is shown by the box outlined in red.  This deficit is not indefinitely sustainable, and must eventually be repudiated, or repaid.  In the case of repudiation and the deficit is also reduced to zero,  Qw collapses to Qe, Once again, the revenue of producers, and the expense of consumers, is equal.  See: Diag B   Note the country is still trading freely, and so still exposed to world price Pw and supply Sw 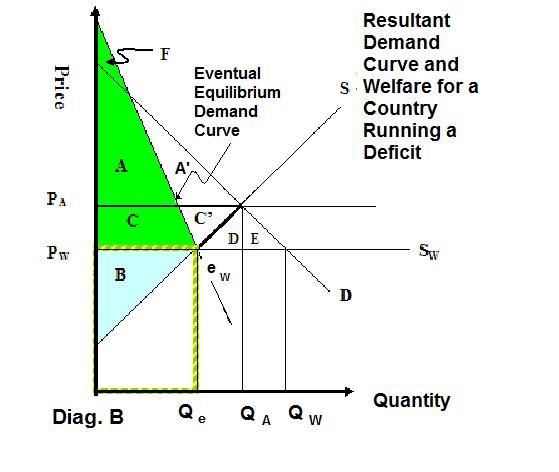 What this means is that a new equilibrium is established, at ew, the original demand curve D shifting to a line passing through this equilibrium.  This shift is a result of a loss of consumer income, since, for an economy, the income of its consumers equals the revenue of its producers.  The slope of this line need not be the same, as is indicated the diagram.  This conclusion is a result of the following consideration:  Those who are prepared to pay the most, (even if they don’t have to)  generally have the most money.  These are least likely to be harmed by the collapse of the trade deficit to zero, at the new equilibrium, so their consumer surplus will be unreduced. They have first call on production, therefore if fewer goods are produced, they will still get their share. The demand curve will thus tend to pivot, although other considerations enter in.  In any case, the consumer surplus is reduced by A’ + C’. along with the region D + E,   the reason for running the original deficit. (Consumer surplus may also be increased by some region F  in the upper left hand corner, depending on how the ultimate benefits and costs of trade are eventually distributed.)

The consumer surplus is reduced to A + C + F, which may still be greater than the original A, (with consequent policy consequences.)  The price level is still the world price Pw, and the producing sector is smaller.  But at the new price equilibrium,  revenue of producers once again equals the money expended by consumers, and this can be maintained indefinitely. This is indicated by the box with the green and yellow hatched border, Pw x Qe.  The reduced producer surplus B is the same as when the trade deficit was active.
We note, however, that an increased portion of the economy is now excluded from the consumer surplus.   Where before the opening of trade, the quantity Qw – QA, was the only portion of goods not available to the domestic economy, now, with the reduced producer sector, goods in the range QA,– Qe are also not available.  Socially, this must be interpreted as the result of a loss of income for the poorer sectors of the economy.  And this still results if the debt is merely repudiated.

If the debt is not repudiated, but is instead is attempted to be repaid, we have the situation in Diag C:   Here, the producing sector is further reduced, because debt repayment raises the expenses of all producers.  We have pivoted the supply curve at the axis, (it is certainly to the left of the original curve) on the consideration that some of the most efficient producers will have occasioned the least debt.  Debt otherwise will be accrued throughout the supply chain, resulting in higher costs, and thus lower return, which will affect the ability of all but the most efficient firms to compete.  The new equilibrium, instead of being at Qe, is at QD, The loss of producer surplus is the region outlined in blue, B’.  The consumer surplus is also further reduced by A” + C”, (The triangle outlined in orange.)  Allowing for a change in the domestic debt structure, there may be an increase in consumer surplus  F’, in the upper left hand corner.  The idea is that producers are less often creditors, but more often debtors. (This is a consequence of the ‘real economic’ principle: Only producers can repay debts.) That is, debt increases the consumer surplus, at the expense of the producer surplus.   The new equilibrium eD is still at the world price. 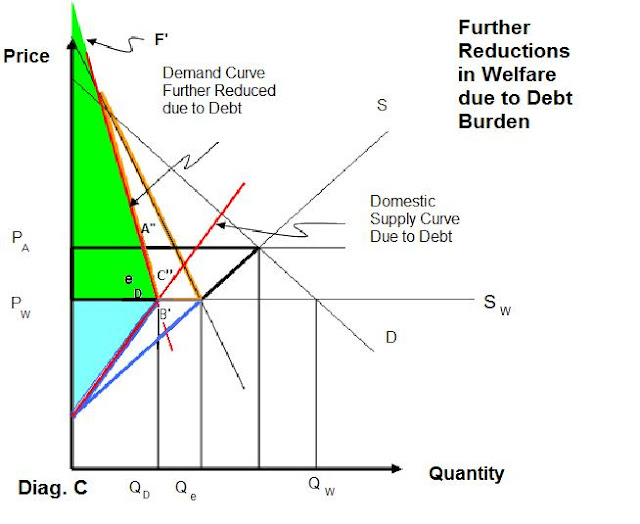 The contrary consideration to the wealthy being largely represented at the left end of the demand curve is that the poor are largely represented at the right end of the demand curve, having last call on quantity produced.  That is, only if the quantity Q at  equilibrium is large, will the poor, those ‘far down the demand curve,’ be able to purchase any. Thus, the less well off, who benefit from the original increase in welfare, since prices are lower for everyone, and thus for them as well, are cut out when the quantity is subsequently reduced to Qe or QD.  We can be somewhat fuzzy about this because we are implicitly dealing with averages.  Yes, strictly speaking, the diagram describes one good in trade between a country and the world.  And in a regular supply and demand diagram, those unwilling, or unable, to pay the equilibrium price are cut off from the supply, and do without.  Here, rather, they, that is all but those who are the most well off, do with less.

Since, in a market economy, power is proportionate to demand, the consequence of running a deficit is a radical redistribution of power in that economy:  Power is taken from the less well to do, and concentrated at the top.  At the same time, the economy is, as a whole, poorer, and thus, on the world stage, less powerful.

We see, therefore, that free trade is disadvantageous to a country that runs a deficit.  Unless a country can maintain a surplus, its economy will eventually contract.  This contraction will not be uniform, but will be concentrated at the lower ends of the social scale, resulting in an increase in inequality.  Since all countries cannot run a surplus, the unmitigated benefits of free trade are, at least, questionable.