We wish to show, that excessive CEO compensation is deleterious to an economy.  We show that excess savings is also deleterious, the so-called "Paradox of Thrift." 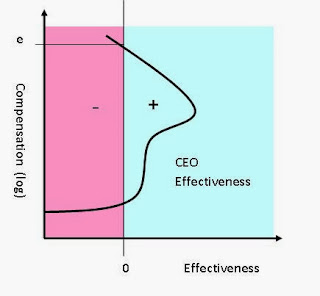 Prove in the case of the Universal Corporation: UC produces everything. Therefore, all it buys is labor. Thus, all revenue goes either to labor compensation or to capital. We include capital’s share in CEO compensation.  Thus, UC’s employee compensation, minus the CEO’s compensation share c, in the nth cycle, is Rn(1- c), where Rn is UC’s revenue.  Suppose now everything UC’s employees buy is produced by UC, and UC sells nothing to the CEO. Then UC gets all its revenue by selling to its employees,
( Rn (1- c) ) plus a portion, Rn e, selling to persons outside the corporation.. Therefore,
Rn+1 = Rn((1- c) + e);  The growth in revenue, for a given period: DR  =  e – c.  So, where c > e, DR is negative, that is, revenue declines. The CEO of the Universal Corporation, regardless of competence, if paid to much,  is adversely effective. Done.

Now we can include the CEO as an employee, ie someone who buys from UC, if we instead interpret c just as what the CEO does not spend, but saves.  Indeed, this gives us the Paradox of Thrift, when c is interpreted instead as the sum of what all employees, CEO included, save. So, if the portion the employees of UC save is more than the portion sold to people outside of UC, ie if c > e, revenues will decline.

If instead we separate savings into components, labor savings and capital savings, (where investment is a capital expenditure,) sl and sc, then if sl + sc > e, revenues will decline. If sc > e, then sl must be negative, and of magnitude greater than sc –  e, in order for the corporation to grow in revenue.  That is, labor must dissave if capital saves at a rate greater than the rate of selling outside of UC, for UC to grow.  (This can of course be forced by paying labor less than subsistence.)

Note, if e is negative, eg if the employees also buy from outside UC, at a rate greater than persons outside of UC buy from UC, the employees of UC must dissave, (both  c and e are negative),  |c| > |e|, in order for the revenues of UC to increase.  In components:  we must have |sl + sc | > |e|, where if sc is positive, sl must be negative of magnitude greater than  sc + |e| for there to be positive growth of revenue.

If we include a third component, call it government, and call UC a nation’s economy, then for positive growth we must have:  sg + sl + sc  > e, or  sg > e – ( sl + sc  ).  If we separate e, net exports, into its components x exports and m imports, we require for growth of revenue
sg   <  x -- m – ( sl + sc ). Clearly, where imports are greater than exports, the problem is exacerbated, and there must be extensive dissavings by government if there is savings by labor and capital.

What do we mean by dissave? Savings, of course, may mean putting money into mattresses.  Dissaving implies there must be an input of money, such that more money is spent, by the components of an economy, than is earned. This may be money taken out of mattresses.  This may be money lent by an entity outside of the economy. It may be money added to the supply, as with inflation. Where it is lent by an entity inside the economy, (finance, say, thus sf) we have the same problem:  We have a change in the relative revenue collected by the components, but the revenue for the whole economy necessarily declines.

This is rather tautological.  With a fixed money supply,  total revenue cannot increase, and any quantity of money taken out of the system leads to a decrease in revenue.  Since nominal profit requires an increase in revenue, a fixed money supply will, in the best of circumstances, result in an average nominal corporate profit of zero, unless there is dissavings. Some might argue that the policy of the wealthy for the past 35 years has been a forcing of dissavings on labor, (and government,) from which they have taken their profit. This is manifest by the fact that the share of wealth of the 1% has increased from around 20% of the total economy to around 40%. The share of wealth of the rest of society has correspondingly decreased from around 80% to less than 60%, and all but 10% is concentrated in ownership by the next 19%.  80% of the population of the United States combine to own only 10% of its assets.

PS:  The diagram is actually kind of a joke.  It's really a copy of the backward bending labor supply curve for an individual worker, a janitor say, who, when 'paid to excess,' is expected to produce less, in particular, work fewer hours. (This effect somehow is not thought to apply to CEO's.) While true for the CEO of  the Universal Corporation, in an economy it is only true for the sum of all CEO's.  Any individual corporate CEO, of course, gets nowhere near the compensation necessary to have a deleterious effect on the economy, (though he still might be expected to produce less if overcompensated.)   But that the sum of all CEO compensation, the sum of all compensation to the wealthy, may be harmful lies the problem, which we discuss in my next post.
Posted by greg at 11:39 PM No comments: