Destruction of Production from Unbalanced Trade

Walmart promises lower prices.  But at what cost to society?  Locally, the consumer seems to benefit.  But what about the domestic producer, who may be put out of business when a foreign supplier is chosen over him?  He is also a consumer.

We further discuss the situation of unbalanced trade, where one country runs a trade deficit with another country.  For previous discussions, see:   http://anamecon.blogspot.com/2011/03/free-trade-welfare-and-debt.html  and the pointer there.

We start with a retail outlet, which sells the product of a domestic producer.  The domestic producer (or it may be many producers)  produces quantity  Q of his product at price P, at the equilibrium point e, intersection of the supply S and demand D curves (blue and red dashed curves.)  The quantity Q goods sell at price P for total revenue to the producer, or producers, of P x Q.  This is also the price paid by the total of all consumers. 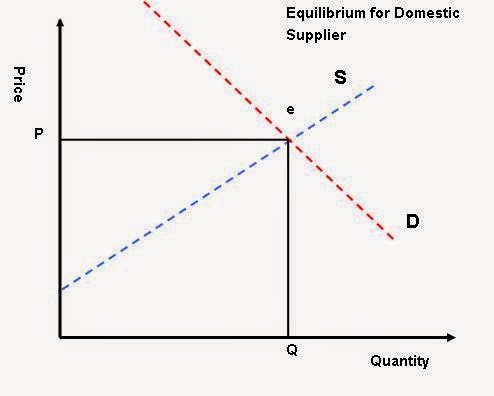 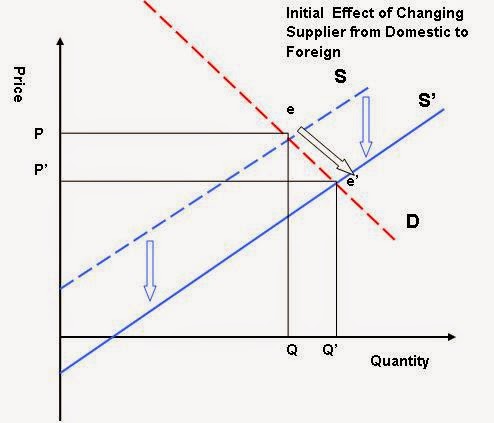 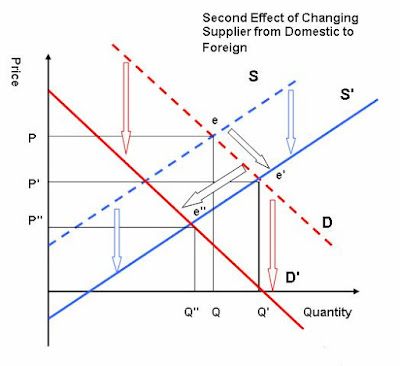 Thus the new equilibrium point is really at e”, the new intersection of the shifted demand and supply curves.
So whether or not the the new equilibrium point e” is to the left or right of the original equilibrium point is going to depend on the relative elasticities of the supply and demand curves, and the relative difference in the size of the shift of those curves.If the demand is inelastic and the price for imports is sufficiently lower, ( a decrease to something less than 50% of the domestic price of production,) the increase in consumer welfare in the domestic market could be comparable to and even greater than the loss in domestic revenue. So the domestic economy might even show a benefit.

In general, if we just compute the gain in consumer welfare to the loss or producer welfare, there will generally be some gain. However, this neglects the loss in producer welfare to producers of factors higher up the production chain. The costs to a producer are always revenues to the producers of factors to that producer, and these other producers will also suffer  Whether this chain of suffering amplifies or diminishes as it propagates would seem to require a closer analysis of the different cases..

With balanced trade, there is an increase in welfare for everybody. Producers get to produce more.  Consumers get to consume more. However, that increase also includes an increase in marginal production and marginal consumption. The possibility remains that the increase in benefits is at a cost in resources which would be more efficiently used elsewhere in the trading countries, the cases generally being those with inelastic supply and elastic demand.

The true equilibrium point is at quantity Q* = 0.  That is, without balanced reciprocal trade, the equilibrium is at zero imports. It may take a long time to get there, but the net final result is merely the destruction of domestic production. The economy is no longer able to import except by selling off capital. But in this it is limited, also. There is only so much capital.  There does exist, however, the argument from debt:  The economy can be maintained by borrowing.  But this is in the long term untenable, and any net import must eventually be paid for by destruction of future production.  Further, because of the costs of borrowing, the amount of future productive capacity destroyed is greater than would be destroyed without borrowing.  Borrowing makes a bad situation worse.

Let’s take a different look at the change in situation.  Consider first the domestic economy as a closed system. The flows of  money (Black) and goods (Red) stay within the domestic boundaries, and the system is in equilibrium, by which we mean that roughly the flows compensate for each other.  (The rest of the economy consists of other producers and consumers.)  There may be changes, but these are accompanied by corresponding changes in other flows. 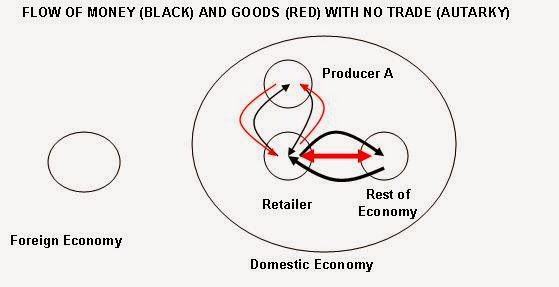 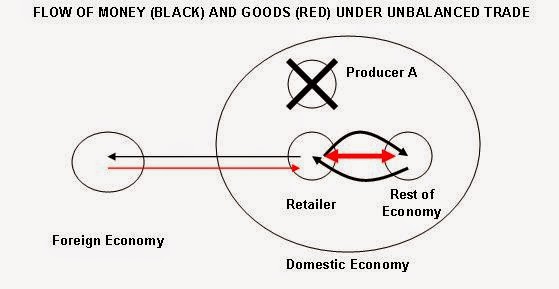 We observe, like water through the drain in a sink, money continuously flows out of the domestic economy.  Goods flow in, but unless the goods are capital goods, (and they would likely not be, because the return on investment is lower in the country running the deficit,) they are consumed and need to be continually replenished.  The continual loss of money represents ever increasing demand (money is demand) by the foreign economy on the domestic economy, while the domestic producer has been eliminated.  The domestic economy is thus ever less able to pay an increasing debt. It is certainly less able to repay with production. But it is also increasingly unable to repay this debt even with capital, because the value of capital has decreased, since its return is lower due to the foreign competition. 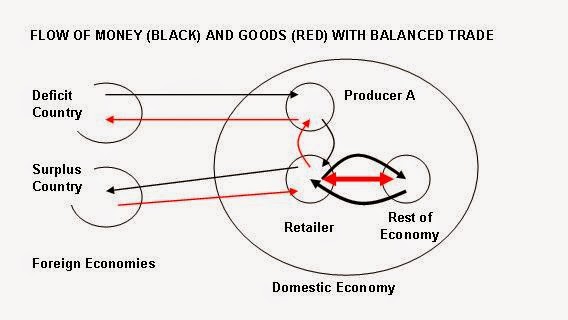 So, what would be the effects of a trade deficit on the domestic economy.  We already know that the domestic producer shuts down, resulting in a shift downward in the demand curve greater than the downward shift in the supply curve.  Since the new equilibrium point e” is to the left of the original equilibrium point e, the quantity supplied at Q” is less than the original quantity supplied at Q. However, the same phenomenon happens for all imported goods. All imported goods are supplied at lower quantities than were originally produced by domestic producers.  Otherwise the domestically produced good would be preferred by domestic consumers.

On the level of the individual, the mean income decreases, and is greater than the decrease in price.  That is, in real terms, the average consumer is poorer, because of the trade deficit, than he was before there was a deficit. The decrease in price does him no good, because the decrease in his income is greater. From a social point of view, poverty increases, and income and (long term) spending of the average individual decreases.  From an economic point of view, capital investment decreases, and indeed, on average, the economy is decapitalized, that is, its capacity for production decreases.  This has the implication that the costs of capitalization increase.  Another way of putting this is that the return on investment decreases.  The economy is less able to maintain itself and its infrastructure can be expected to be under maintained, and to decline.

The results of running a trade deficit demonstrate the need for government regulation of trade. Clearly, a private entity may increase his profit while destroying a part of the domestic economy, if it is not compensated for. The free market credo would be that this is just too bad for the domestic producer.  This should be discouraged, because the damage is not restricted to the domestic producer.

It also shows some of the consequences of incompetent, or if it be, treasonous, government, allowing or even encouraging the destruction of the livelihood of many of its citizens.

Finally, it shows that it is sometimes necessary to think two steps, instead of only one, in reaching conclusions.
Posted by greg at 3:43 AM 1 comment: