“Since 1994, business receipts have grown about 50 percent faster than profits, tax data show. Since corporate officers are supposed to run companies efficiently, the narrowing margin on sales is an indicator of poorer performance and thus may partially explain why overall their pay is smaller than in the 1990s, a fact nobody knew until just now.”

These would seem to be the top 5% minus the top 1% guys. We would also expect this as a result of increased foreign competition that is, though indirectly for most corporations, the equalization of factor prices brought about by that foreign competition.

Not so much health care and education, (defense?) though, as these are most insulated from direct foreign competition. So we would expect these to become relatively more expensive, but see also: Baumol’s cost disease, at eg: http://prescriptions.blogs.nytimes.com/2010/01/17/an-economist-who-sees-no-way-to-slow-rising-costs/ for another explanation. But that doesn’t explain the difference between US and Europe.

Seems on of the reasons healthcare in the US is more expensive is because the prices are higher than elsewhere! Everything costs more! Well, yeah, that’s what cartels and monopolists do: drive up prices by restricting access to goods and services. An aside on the government role in all of this: http://www.boston.com/Boston/whitecoatnotes/2011/09/journalist-groups-decry-removal-online-doctor-discipline-data/mRYBMGSUQYNyJb5vChPJsO/index.html

See: http://anamecon.blogspot.com/2010/03/real-problem-with-health-care-in-us.html
for my description and prescription.
Posted by greg at 1:11 AM No comments:

An Ice Age in Our Future?

Well, the subject of climate change has comes up from time to time. Often in denial.
A recent cite of evidence (Shrinking Artic summer ice.) has come up at:
http://economistsview.typepad.com/economistsview/2011/09/the-lack-of-ice-age.html#comments. Follow the comments for more references. I think I’ll also give some references in a later entry.

Now I’m not one of those climate change deniers. But neither am I quite in the camp of the global warmers, either. Global heat retention, yes, but that’s not quite the same thing.
The main problem is that we are dealing with a non-linear system, here, and non-linear systems are, well, non-linear, full of curves and unexpected changes. And reversals.

Most particularly, from the point of view of climate change, for the past million years or so, whenever it has warmed up- enough, we have an ice age: God turns on the air conditioner, to cool things down. NOTE: Ice ages work the reverse of how you might think they do. They do not start cold, and then warm up until all the ice melts. They start warm, and cool down until they stop, because... well, the air conditioner shuts down: Evaporation in the Pacific is no longer sufficient to drop more snow in Canada than melts in the summer.

Ice ages have only been happening for the last million and a half years or so. What about the ocean circulation could have changed?

Drake Passage 41 mil yrs ago: This created the Antarctic current, which just goes around Antarctica, and which basically cut off Antarctica from the rest of the oceanic circulation.

Isthmus of panama 3mil yrs This cut off direct flow from the Pacific to the North Atlantic, which would help cool the Pacific.

Bering straits got narrow about 1.5 million years ago, when they were probably in the neighborhood of 200km wide. A pretty gradual transition, admittedly, but there is a definite critical point in the transition, when the straits were narrow, and shallow, enough to block sufficient flow to the Artic from the Pacific to keep the North Pacific from overheating.

The theory runs like this: Because the earth is warmer, but the pole is still cold, there is increased heat transport from the equator to the North pole. The main transporter of heat is the circulation of the ocean. But because of the peculiarities of modern geography, for the Pacific, the North Pacific, to cool off this way , water must circulate through the Indian ocean and up the South and North Atlantic to the North pole. It can’t just go to the South pole to cool, as this is blocked by the Antarctic Current. Neither can it just go through the Bering Straits, which is too narrow and shallow to support a sufficient rate of flow. Because this current is so long, it is not strong enough in itself to equalize the temperatures in the ocean, in particular, to keep the North Pacific cool, and the Arctic relatively warm.

Meanwhile, what comes down must first go up. For snow to accumulate in Canada, it first has to evaporate, off the North Pacific Ocean. Ordinarily, evaporation in winter is less than the melting rate in summer, so the snow melts each year. But evaporation increases exponentially with temperature, while melting only increases linearly, (I got this from an old Dover book on glaciers.) so there is a crossing point, when the evaporation rate off the ocean goes above the melting rate for snow in Canada. See Diagram. 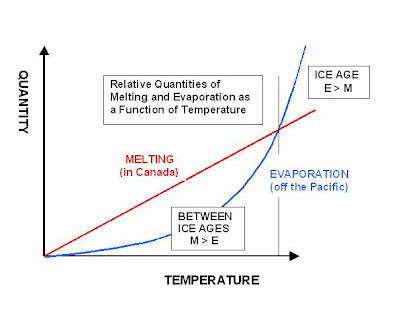 Note the Temperature and Quantity scales are rather qualitative. (Quantity is quantity of water.) The point is just to suggest that with increasing temperature, an exponential curve will eventually rise above any straight line.

And then you have to figure in the wind, which increases during ice ages, to an average 30km/hr or so. But that increases both melting and evaporation rate, so it would give an upward curve to both lines.

However, there is another feature about increased wind velocity, which we might dub “Quantum Earth.” What we mean by heat retention is that the average energy content of the atmosphere will increase. As the energy content of the atmosphere increases, so will the average wind velocity. As the wind velocity increases, so will the Coriolis force, which will cause more cyclones and such. This will happen. But if wind velocity increases enough, it might also cause an increase in the bandedness of the atmosphere. (This is a speculative thought: So instead of two, there would be three jet streams in each hemisphere, and four climatic zones. Basically a new one would appear at the equator, as the others migrated north. But, this would render the climatic gradient from North to South steeper, so the present temperate zone would take on qualities of artic air.


But of course, this bandedness idea is not necessary to the rest of the theory, as it is so far developed.

So ice ages are caused by warm ocean, particularly the Pacific. During ice ages, oceans start warm, and slowly cool, about 10 degrees C. And during the interglacial periods they increase that same 10 degrees C., much quicker than they cool, by the way. And indeed, since the end of the last ice age, oceans have warmed by about 10 degrees C. Check out, eg, “Vostok core data images.” Note CO2 levels also peak, prior to ice ages.

So the issue becomes, or the question is, are we headed for an ice age, or are we going to blow right by the conditions necessary for one by having such a massive quantity of greenhouse gases in the atmosphere, if that makes the difference.

Unemployment, Average Wage and the Distribution of Income

Employment and the Average wage.

Consider an economy where one person collected the entire national income in wages. Everyone else would be unemployed, or at least would be paid nothing.

We look at a model economy: The economy is static, that is, one whose size is some constant Y. There is only labor and labor is all paid the same, W: See: Diagram. GDI (Y) is Gross Domestic Income. Then the income of that economy is the box, any box actually, equal to Y = W x N, N the number of workers. But, this is also the production 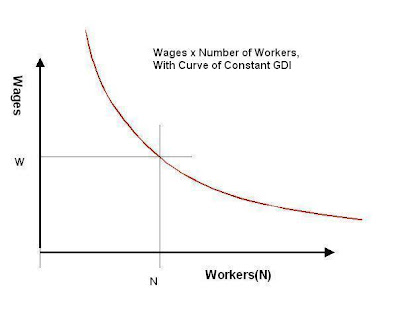 Now, given the economy is static, what would happen if we raised (real) wages, to W’. Then the number of workers would have to decrease, to N’ where the area of the box would remain the same: W’ x N’ = Y = W x N. Unemployment would thus increase. Conversely, if we were to decrease wages to W’’, then in a static economy, the number of workers would increase, to N”, W” x N” = W x N, and unemployment decrease. (The curve of constant GDI, or Y, is a hyperbola, by the way.) 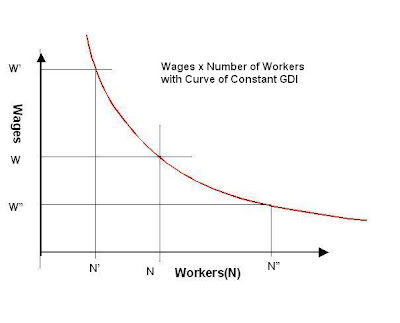 We now go to the real world, although we treat it just like our model.

Since we are looking for unemployment rate as a function of mean wage, the variable n is equal to n = 1 - %u/100; %u equals the percentage unemployed So we substitute that expression for n: So:

Of course this is not correct, as a higher unemployment rate than measured suggests a higher total labor force, and thus a lower c. Consider instead a total labor force of 160 Million. Then for the same values of total compensation paid employees, $8264T, we have c = $51,650. If we estimate 20M unemployed, for an unemployment rate of 12.5%, we have a mean wage of $59,029, or about 9% higher than the $54,368 mean wage required for 5% unemployment. 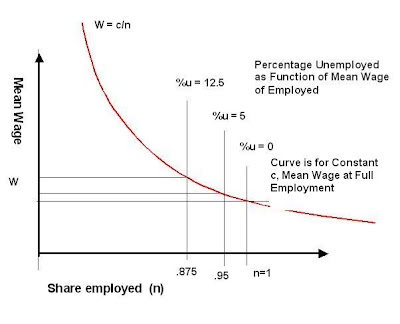 So the prescription is to lower the mean wage to c/.95, which will result in an unemployment rate of 5%. Since this is just an average, it can be done in a number of ways, depending on the inclination of policy makers. One way would just be counting the unemployed as employed. This of course would have no real effect. A real way would be to lower every employed person’s wage by the difference. This would provide money to employ the unemployed at the same average wage. Another way we might consider would be to lower the minimum wage. Assume 20% of the labor force works at or near minimum wage. Then by lowering their wages ah, $25,000 or so, unemployment could be reduced from 12.5 % to 5%.

Well, minimum wage is about half $25,000. So that method is infeasible. But the same could be accomplished by lowering say the top k% in income by 100/k times the difference. Thus transferring about $500,000 per person, on average, in the top 1%, would compensate for the difference between 12.5% unemployment and 5%unemployment. On average, since the top 1% consists of all those making more than $400,000. But it also consists of those making much more.

The existence of this solution implies that, where there is a great disparity of income, a consequence of that disparity is a high unemployment rate.

Indeed, the calculation could be modeled on percentages: A transfer of 7.5% of national personal income from the top 1% of the income earners to the rest of the labor force would decrease the unemployment rate about the same amount, from 12.5% to 5%

The philosophy is if the boss pays himself too much, he can’t hire as many workers. Those he hires he can’t pay as well, and he can’t train them as well. Jobs that need to get done don’t, or get done badly. In today’s society, there are many jobs that need to be done, but the bosses pay themselves too much.

Note the figure we have used: Total compensation of employees received. However, we can use other figures of personal compensation: eg: $12,091T (BEA Table 1.10 lines 2+11 Compensation of employees, paid + Net Operating Surplus, figuring the bosses also pay themselves out of corporate profits.) This merely affects c, and the absolute scale of the differences, but not the percentages.
Posted by greg at 10:24 PM 1 comment:

Ah, we have from the excellent Charles Smith, over at:

that Karl Marx did indeed predict the financialization of the capitalist crisis.
So, the problems with using secondary sources...
Mr Smith's blog should be read, btw.
Posted by greg at 12:28 AM No comments: