We revisit the issue of free trade, using the more traditional diagram. Compare to:

See the first diagram, “Welfare Under Autarky.”
Regard the diagram first as a single good. Later we can consider it a sort of average of all goods traded by that country. Look first at the basic axes, Price and Quantity. The price of a good goes up as you go up the Price axis. The quantity of a good goes up as you go from left to right on the quantity axis. Any point X is the number of goods at that particular price. We put point X as that little bump on the S curve. Nothing happens here, because with that many of our particular good around, and at that price, nobody wants to buy that particular good. There’s more than people want, so they don’t have to pay that price, because there is someone around who will want to get rid of what they have for less.

To begin with, we have just the traditional Supply S and Demand D curves. The Supply curve goes up from left to right, because as price rises, producers are willing to produce and supply more. The Demand curve goes down, because as the price goes up, consumers are willing to buy less. Where they meet is the equilibrium point e. That is where price and quantity of goods offered for sale equals the price and quantity of goods demanded. Note that all goods are sold at the same price, P, irregardless of the cost of producing them. The cost is a point on the Supply curve. Naturally, when it costs more to produce goods than that price P, as at point X, they are not produced in the first place. Well, except when they are subsidized. 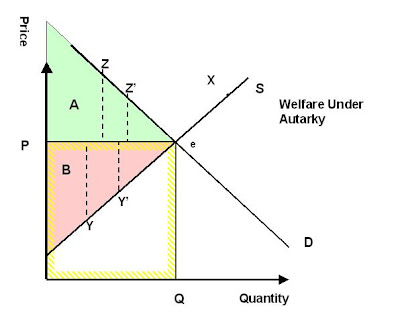 The pink triangle is what is known as the producer’s surplus. A producer at point Y along the Supply curve is willing to produce at that price. That is his break even point. But the equilibrium price is P, at which all goods like his sell, so the pink above is all gravy to him. His surplus. To a person at Y’ further up the curve, the break even price is higher, he has more expenses, but the price he gets is still the equilibrium price P, so he has a smaller surplus. He make less profit. Less gravy.
The pink triangle is the surplus of all producers along the S curve. Their profits, if you will.

The green triangle is called the consumer’s surplus. It is the difference between what the buyer at Z, say, is willing to pay, and the price P he has to pay. So that green below is his gravy. His surplus. The person at Z’ further down the D curve, is willing to pay is less, but he still only has to pay P. But his benefit is less. So the green triangle is the surplus of all consumers along the D curve.

It is just your basic supply and demand diagram. But, this diagram also describes the situation of a country isolated from other countries and without trade of any sort. That is why it is labeled “Welfare under Autarky,”. Its supply and demand are entirely contained in the country itself. It is called a Welfare diagram because the green and pink triangles describe the benefits that consumers and producers receive when buying and selling goods.

Now while the triangles are important what is really important is the box P x Q, outlined by the yellow hatching. The price of all the goods sold P, times the quantity of all those goods Q, is the total money spent by all the consumers, the total expenditures. That is the total cost to consumers. But that box P x Q, is also the total revenue received by the producers for those goods, price times the number of all the goods sold. They are equal, which is as it should be, because, in an isolated country, all the producers are the consumers, and all the consumers are the producers. They are the same people. Now some consume more and produce less, and others produce more and consume less, but on the average, everybody produces and consumes the same amount. Which is one way of looking at the situation. The other way is to say that the total consumption and the total production are equal. Everything consumed must first be produced. Everything produced must eventually be consumed. By the same people, the population of the country under discussion. This is the condition under autarky.

We will come back to those boxes later.

Now we open up the country to trade. Free trade. We start with the next diagram, “Welfare under Free Trade World Price Less than under Autarky,”
with equilibrium point where the supply and demand curve come together, at the point e. Under free trade, the country is exposed to the world supply of goods, which is much larger than the country’s supply on its own. In fact the world supply is such that, at price P’, any amount of goods can be bought. We can by 1 at price P’, we can buy 1000 at price P’, we can buy a million. On the world market. So the quantity we can buy is independent of P’, so the line, the world Supply curve big S, is horizontal at P’. This is called an infinitely elastic supply curve. So here the world price is less than the equilibrium price under autarky. Now, because consumers can buy goods cheaper, at the world price P’, they buy more, quantity Q’, so a new equilibrium point e’ is established where the world supply curve big S and the Demand curve D intersect. (The demand curve does not change. Demand does not change when the price goes down. The quantity demanded does.) 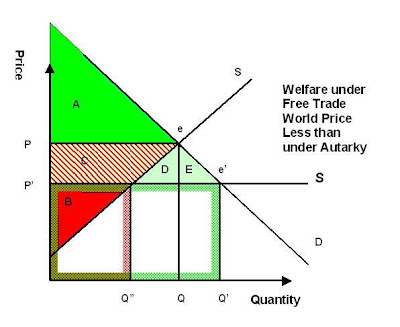 Because consumers can buy goods cheaper, at the world price, their surplus, their benefits, increase, to the larger triangle consisting of the regions A,C,D, and E. They may or may not be expending more, but they are certainly buying more goods, because they are cheaper. The producer surplus, however has shrunk to the new smaller, region B. This is because they no longer can sell goods at more than the world price, that is more than P’. Also, because of this, those producers which can no longer break even at P’ are driven out of business, so domestic producers can only produce Q” of goods, and still make money.

Unfortunately, remember those boxes we talked about? They are now different. Total expenditures by consumers is now the new price P’ times the total quantity consumed, Q’, ( green and green and red hatched edges)while total revenue earned by the producers is only P’ times Q”, (red and green and red hatched edges)the total price times the quantity produced. But remember, producers and consumers, they are the same. Producers are consumers, on the average, and in total. That is, they are now spending more than they are earning, and the difference, (Q’-Q”) x P’, now goes to the trading partner. That is, their welfare increased, but they are buying more, and producing less. They are dis-saving. They are running a deficit.

There is a moral to this: Free trade can be used as an excuse for sloth.

Running a deficit is unsustainable. What is the remedy? Well, first, let’s look at the other situation: See the next diagram: “Welfare under Free Trade World Price Greater than under Autarky.”
Well, when the world price is greater than the price under autarky, the price is driven up for domestic consumers, too. They have to pay the world price, too, P' or domestic producers will just produce and sell to the foreign market. It also means that domestic producers produce more, so a new equilibrium price is established at e’. Once again we see that net welfare has increased over the autarky case. This time it’s the producer surplus that is increased C + D + E, while the consumer surplus is only decreased by C, for a net gain of welfare D + E. 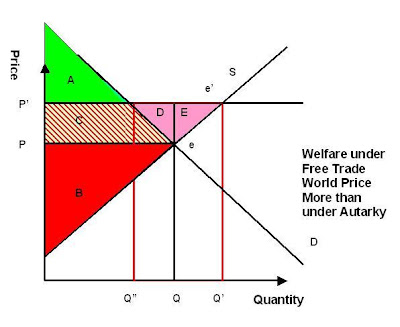 Now lets look at the boxes: (They’re not hatched. You’ll have to follow them yourself.): The expense of consumption has gone from P x Q to P’ x Q” This may or may not be a reduction in expenditures, but certainly the quantity consumed has decreased. Meanwhile, the income, the revenue from production has gone up from P x Q to P’ x Q’. The difference, P’ x (Q’ – Q”), outlined in red, is income greater than expenditures. It is net income. And note that entire difference is what is earned from trade, from foreigners. Of course, the area below the Supply curve is basically expenses, so what is saved is only the triangle above it. Which seems to be a different, and lesser quantity, from what is dis-saved in the other figure, but this merits further analysis. Elsewhere.

Anyway, compare the two figures. One diagram describes the importer, the other the exporter, in the same trades. In both figures welfare is enhanced. In one, it is consumer surplus, in the other producer surplus. So total welfare is enhanced. But it is enhanced at the expense of one party going into debt to the other! But this is no difference than exchange between households. In fact, the diagrams can describe the exchange between two households. It doesn't have to be countries. It can be any two economic entities. But this is a bad joke, because the situation is unsustainable. The first party must pay off the other eventually, and then the diagrams reverse. Of course, that requires behavioral changes on the part of both parties. The consumer must become the producer, but the producer must also become the consumer, if he ever allows himself to be paid back. Or he can just buy up the other's capital and become rich. At the expense of his fellow man. There is more to this. There is a very real moral issue to one man working harder so as to make the other his slave. But note we have returned to the producer-consumer problem.

http://anamecon.blogspot.com/2010/05/greek-debt-and-producer-consumer.html
To be continued.
Posted by greg at 12:17 AM No comments: