The Effects of Unbalanced Trade

The United States trade imbalance has long been an unresolved issue. Some claim that barriers to free trade are necessary, others that they are not only unnecessary, but harmful, and even immoral, since they would force higher prices on otherwise uninvolved consumers.

Those who claim that current trade policies are harming the US have, to our knowledge, proposed no clear mechanism. We propose one here.

We should also expect erosion of the tax base. There is, in the economy as a whole, more pain than gain. We model the mechanism.

In the exporting country, on the other hand, the price level goes up, and including the revenue from its exports, so does the revenue of its industries, and ultimately the country’s demand. Its industries, with increased revenue, grow, as does the country’s demand, along the Aggregate Supply curve. With continued exports and continuing increases of revenue, industries continue to grow. So does demand, and employment. 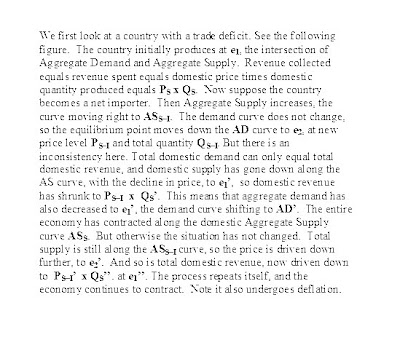 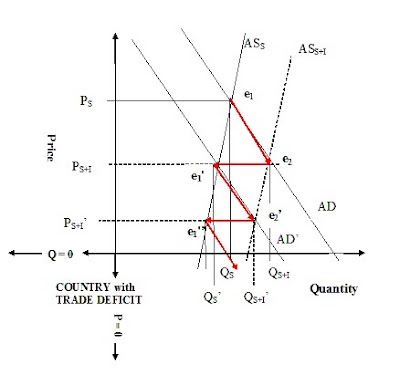 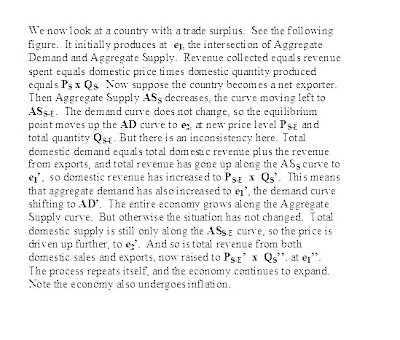 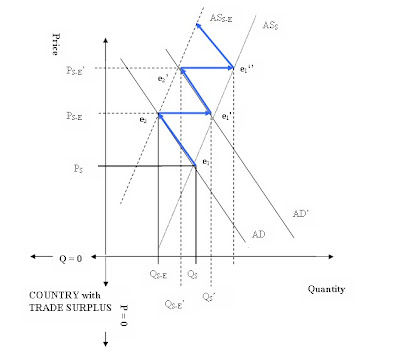 The unbalance of trade has been an issue for some time. When one is not doing well, one looks around for someone to blame. One also looks for causes. When one finds both, one must act- wisely.

Note that when trade is balanced, there is, here, no effect. Only when there is an imbalance in trade, where one country is a net exporter, and the other country a net importer, does the importer’s economy erode, and the exporter’s economy grow. There is a certain symmetry: The exporter benefits at the importer’s expense, despite the apparent benefits to the importing country, and the apparent costs to the exporting country.
Posted by greg at 11:16 AM