So the title pretty much says it all. Let's get to a few details.

If the government imposes a sales tax on an item, not only do we expect an increase in tax revenue, but we also expect an increase in the price of the item.*  For almost all goods, (and here we will ignore any possible exceptions,) the quantity demanded will also decline. Because of this, a sales tax may be used to regulate the demand for, and therefore, although perhaps after some delay, the production of, a given product. By increasing the sales tax, both demand and production will be reduced. By reducing the tax, demand for and production of, a product will be increased, over the current quantity demanded.
Now, there is no particular reason why we should restrict ourselves to a positive tax, if for some reason,we wish to stimulate demand for a product beyond the present demand. We can impose a negative.sales tax on a particular product sold. The price to the buyer will go down, the quantity demanded will increase, and production will eventually rise to meet this subsidized demand.

And of course, there is no reason to restrict such a variable tax to finished goods or services. It can be imposed at any point in any market in any supply chain. Indeed, in countries with a VAT, the mechanism for such regulation and control of production is already in place.

With such a tax in place, resources can be directed to any place in an economy. In particular, resources can be directed to where they are most needed, say in response to some disaster, and not just to where the demand is greatest. Indeed, society's current practice of meeting any particular demand, that is, responding to some local surplus of money, may not always be in the best interests of the society, or its economy.
If, for instance, more infrastructure is needed, demand in that sector can be increased, while at the same time reducing the demand in other, more discretionary sectors,where resources may be being inefficiently used, or even wasted.

In the case of imports and exports, the same mechanism of variable taxation may be used. A goal, here, of course, might be to establish a balance between the value of imports and exports. Another might be to encourage an export of finished goods, and encourage an import of factors of production.
And of course, this system of allocation could be made completely transparent.
Naturally, there are many technical details which would have to be dealt with, most particularly how to deal with the relative differences in the elasticities of supply and demand for any given product or factor of production. However, I am confident that such difficulties can be worked out.

The main obstacles I see to the establishment of this, or indeed, any rational system of allocation of resources in an economy, to be political.
________________
*Almost always.  The only possible exceptions would seem to involve a completely elastic supply base, with a high margin of profit above cost capable of completely absorbing the tax. The price may not change, as the profit would decline by the amount of the tax.

With totally elastic supply, however, the price is generally driven down to cost by competition, and the margin of profit is at or near zero.
Posted by greg at 7:20 PM No comments:

Back, and it's been two whole days!  So  I'm going to post links to (some of ) my answers in economics on Quora, here, just so they're all in one place.  In no particular order.  For your convenience.

https://www.quora.com/Why-should-I-hate-free-markets/answer/Charles-St-Pierre Why you should fear free markets


PBOC injects record $83 billion into the financial system - Asia Times  So this was reposted to Quora,  I posted a comment there suggesting that the financial system was the wrong place to put the money.  They should instead have a negative sales tax.  This would pretty immediately stimulate demand, and make everybody happier at the same time.


However, further thoughts occurred to me, which I (will) discuss above.

https://www.quora.com/Would-the-economy-run-better-if-we-got-rid-of-all-government-control-and-destroyed-monopolies-it-creates/answer/Charles-St-Pierre
Government and the role of violence.
Posted by greg at 8:37 AM No comments:

Due to the underwhelming response to my posts on this web site, I have moved my activity here to Quora.

"It ain't what you don’t know that gets you into trouble.

It's what you know for sure that just ain’t so."

Finally, this little dose of concentrated wisdom from Terry Pratchett (1948-2015) British Author
From Carpe Jugulum, (with thanks to Elspeth Cowrie and her answer at Quora)

"And that's what your holy men discuss, is it?" [asked Granny Weatherwax.]
"Not usually. There is a very interesting debate raging at the moment on the nature of sin. for example." [answered Mightily Oats.]
"And what do they think? Against it, are they?"
"It's not as simple as that. It's not a black and white issue. There are so many shades of grey."
"Nope."
"Pardon?"
"There's no greys, only white that's got grubby. I'm surprised you don't know that. And sin, young man, is when you treat people like things. Including yourself. That's what sin is."
"It's a lot more complicated than that--"
"No. It ain't. When people say things are a lot more complicated than that, they means they're getting worried that they won't like the truth. People as things, that's where it starts."
"Oh, I'm sure there are worse crimes--"
"But they starts with thinking about people as things."

Thank you for your time and attention.

This link is too good to pass up, especially as our Republican Congress debates lowering taxes for the wealthy.


One paragraph: "Their findings, published this week in the journal Nature, have profound implications for contemporary society, as inequality repeatedly leads to social disruption, even collapse, said Tim Kohler, lead author and Regents professor of archaeology and evolutionary anthropology at Washington State University. The United States, he noted, currently has one of the highest levels of inequality in the history of the world."
Posted by greg at 10:06 PM No comments:

The Purposes to Taxation

There are four purposes to taxation.

1: Destroy money. The government doesn’t need to tax to spend money. It just has to write the check. However, money it spends adds to the money supply, and this would cause inflation if an equal amount of money wasn’t taken out of circulation or destroyed. If money is taken out of circulation but not destroyed, as when the government borrows to spend, (which it rarely has any need to,) and this money is accumulated by the financial sector, the potential for inflation remains, and increases as the amount of money in the financial sector increases.

2: Discourage certain behaviors, or, through negative taxes, ie subsidy, (a word for particular forms of spending,) encourage certain (other) behaviors. All spending, of course, encourages the production of what it is being spent on. (Allowing for profits, of course.)

How Misleading are Solar Yeilds?-- A Link

Here is an excellent discussion by Gail Tverberg, over at oilprice.com:  How Misleading are Solar Yields?.

While yes the main topic is indeed that named in the title, she also goes into an excellent discussion of Energy Return on Energy Investment (EROEI:  It is the ratio of energy spent to the energy produced. ) and its origins as a measure if energy return on human (and animal) labor.

She also deals with some important social issues when this ratio drops too low. Societal collapse seems alarmist, but others like inability of governments to collect sufficient taxes, seem to describe our current situation.  She refers to this book:

Her basic point is that the EROEI on PV Panel is (Probably grossly) overestimated.  She's probably right about that to some degree, since mostly we settle for industry figures. The complementary problem for oil, however, is that domestic oil production is also heavily subsidized which means we don't really know the true cost of extraction, and neither do we know the EROEI on it.

In any case, the EROEI is certain to be less than we have historically been used to.  This has two implications: The first is that we must devote a larger share of the economy to developing and maintaining our energy supply.  And the second is that we will not be able to live as comfortably as we are used to.  If our unequal society is unable to adapt to this new condition, it will not survive, and this would be catastrophic.

While some of the issues in measurement  of EROEI return on PVs she raises I believe can be addressed, it is an important discussion of these issues, and as I indicated above EROEI issues in general.
Posted by greg at 9:06 PM No comments: 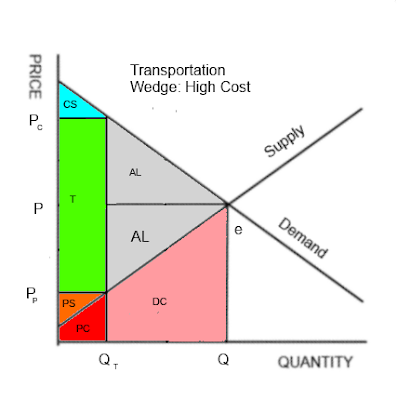 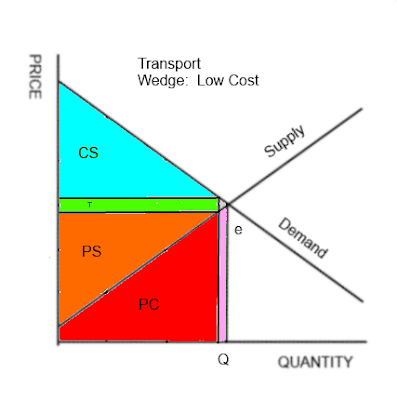 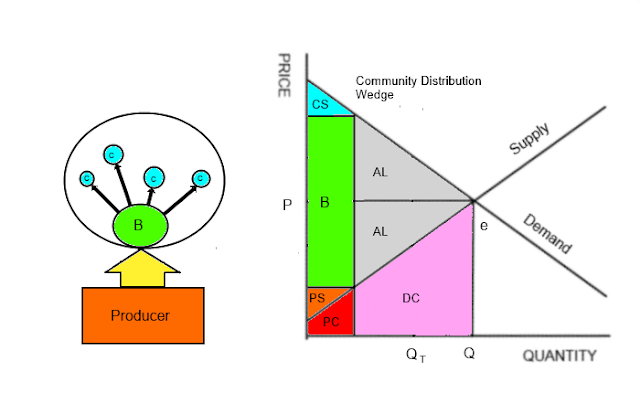 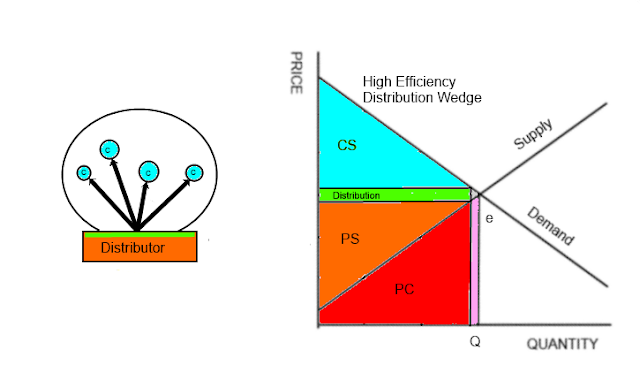 Where the transport costs become low, it may become in the interests of the society to increase the tax wedge, in order to maintain productive efficiency.  And see the previous discussion at http://anamecon.blogspot.com/2017/05/hidden-benefits-of-taxes.html
Posted by greg at 11:43 PM 1 comment: